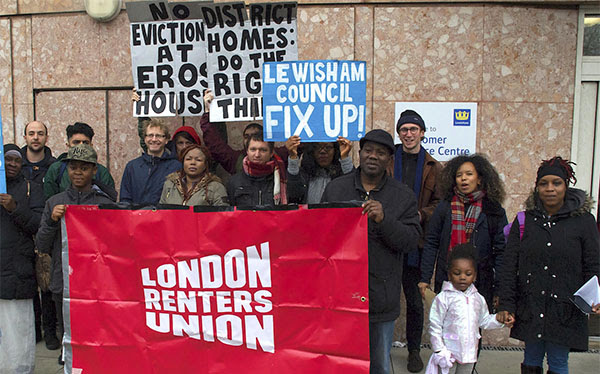 In London, tenancies are short, disrepair is common, and rents are higher than almost anywhere in the world.

After just a few weeks of organising, London Renters Union members at Eros House flats in Catford took action to demand an end to evictions and for urgent safety and disrepair issues to be solved.

The steadfast residents of Eros House in Catford took action to demand an end to unsafe conditions and evictions in their homes. They delivered a letter, with lots of energy to Lewisham Council and one of the management companies that runs the tower block they live in. They were supported by LRU members and activists from Newham and across our city.

They’ve struggled with electrical hazards, serious damp and mould and faulty heating for too long – and some residents are facing eviction by the private company they rent from.

London Renters Union was set by a coalition including Radical Housing Network, Take Back The City, Generation Rent, Digs (Hackney Renters), and People’s Empowerment Alliance for Custom House (PEACH). They’re currently building their first pilot branch in Newham and hope to have branches across the city by the end of 2018.

You can show your support for LRU members at Eros House by sharing the report back from today’s action on Twitter or Facebook:

The full blog post with more info is at: http://londonrentersunion.org/2018/04/11/eros-house-letter-hand-in/